In spring of 2001, Pastor Peter received a “vision” from God. Upon receiving that vision, he prayed that God would send a group of men and women who would want to see that vision become a reality. Within a matter of a few months God assembled a group who shared that same vision!

In the summer of 2001 that group asked the following questions:

In the summer of 2001, this same group of people began to pray, dreaming of one day worshipping as part of an authentic community that valued openness, honesty, and acceptance. Their passion was to be Christ’s hands and feet to the hurting and broken in the city of Chicago and beyond. That dream eventually became a reality as New Community officially opened its doors for public worship services in January of 2002! New Community has met for more than 10 years since then every Sunday!

Our church is made up of people representing more than 15 cultures and various socio-economic backgrounds, New Community is committed to breaking the cycle of “church as usual.” New Community exists to provide an alternative to those tired of religion. We want people to know that God’s desire for them is not to embrace religion, but to be in intimate communion with Him and with others. This is the gospel of Jesus.

New Community was planted in partnership with and continues as part of the Evangelical Covenant Church.

We have reserved parking on W. Logan Blvd, designated with orange cones between N. Francisco Ave. and Sacramento Ave. Parking is also available on W. Schubert Ave., Sacramento Ave. and W. Diversey Ave. within approximately 2 blocks of our church. 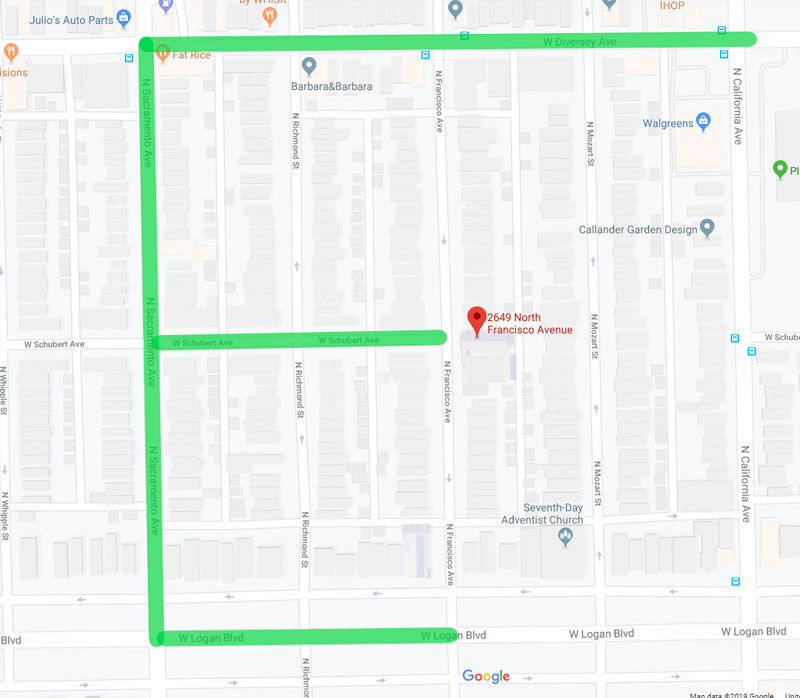